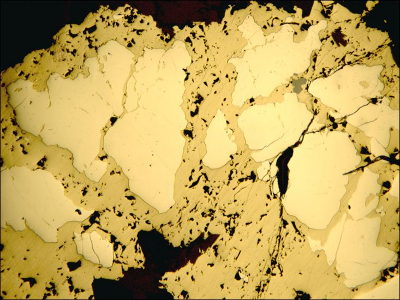 Volcanogenic massive sulfide (VMS) deposits are associated with bimodal volcanism in subaqueous rift-related environments. The felsic – mafic succession of volcanic rocks are hosts to semi-massive and massive sulfides (Cu-Zn-Pb) some of which contain precious metals (Au and Ag). The deposits are sustained by high heat flow (supplied by subvolcanic intrusions and/or upwelling plumes) and by circulating hot fluids within the volcanic pile.

A typical VMS deposit consists of a concordant lens of massive sulfides underlain by a discordant pipe-like stringer zone. The sulfide lenses are formed by hot fluids discharging into the seafloor. The stringer zone and the discharge zone immediately above it, contain much of the chalcopyrite ore. In the more distal parts of the pipe and higher up in the stratigraphy, pyrite, sphalerite and galena dominate. The Cu-Zn-Pb sulfides grade outwards from a Cu-rich core to a Zn-Pb-rich margin. Gangue minerals associated with the ore include barite, quartz, chlorite and carbonate. A siliceous cap rock generally overlies the deposit.

Host rocks to the deposit are characterized by chemical and mineralogical zonation. Extensive hydrothermal alteration is typical of the proximal and distal parts of the deposit, which is enveloped by silicified, sericitized and chloritized alteration zones. The chlorite-rich zone is proximal and the sericite-rich zone is generally more distal to the orebody. Such well defined alteration halo provides an excellent exploration target for VMS deposits.

The age of VMS deposits ranges between the Archean and present. Some of the world’s best known VMS deposits, such as the Kidd Creek and Noranda mines in the Abitibi greenstone belt are of Archean age, others, such as the well-studied Bathurst Mining Camp in New Brunswick is of Proterozoic age. Metal-rich hot fluids currently venting on the seafloor are considered to be the modern analogue of VMS deposits.

Where applicable, Petrographic Reports will  distinguish between hydrothermal and metamorphic minerals around metamorphosed volcanogenic massive sulphide (VMS) deposits. One of GeoConsult’s speciality is the study of metamorphosed VMS deposits such as Kidd Creek and Geco mines in the Superior Province of Canada.

Magmatic sulfide deposits (Ni-Cu-Co) are commonly hosted by mafic and ultramafic igneous rocks. The sulfide ores (often enriched in platinum group elements) are the result of the separation of an immiscible sulfide melt from the sulfur-saturated silicate melt. As the dense sulfide droplets separate out and settle through the less dense silictae melt they become enriched in copper, cobalt and platinum group elements – all of which have a strong affinity for the sulfides with respect to the silicates.  Chalcopyrite, pentlandite and pyrrhotite are the major minerals in magmatic sulfide deposits. Some of the most famous deposits include Sudbury (Ontario, Canada), Noril’sk (Russia), Kambalda (W. Australia), Merensky Reef, Bushveld Complex (South Africa) and Voisey’s Bay (Newfoundland, Canada).

The photomicrographs below show some typical ore textures and some host rocks to the ores.